I used to be very reluctant to mention to anyone that I take an antidepressant. Despite the countless number of people who liken taking an antidepressant to any other type of medication, it still seems different to me. I suppose I still have difficulty grasping the concept of depression as an “illness.” If my heart begins to fail, I don’t have much control over that. It seems like I should be able to get a handle on my thoughts, though, and because I tend to imagine people thinking the worst of me anyway, I guess I believe others would frown upon my need for medical help in this area.

You may have noticed I keep using the word “antidepressant.” This is because “antidepressant” feels more reassuring to me than “mind-altering drug.” See, an antidepressant is a calm, reassuring thing that will help me stabilize my mood and live a happier and more productive life. A mind-altering drug actually has the potential to alter my state of being, in potentially positive or negative ways. Finding the right drug for you can be a godsend; picking the wrong one can result in a nightmare. 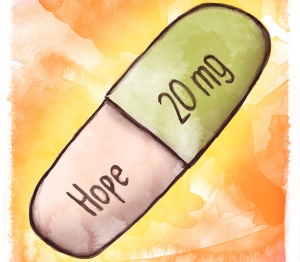 After meeting with my doctor yesterday, we decided to tweak my medication again. Choosing an antidepressant often feels like such a random process to me. If you have the flu, you take Penicillin or an antibiotic; if you’re depressed, well, we’re just going to keep trying stuff until if works. Nevertheless, I often feel a certain twinge of excitement when I receive a new prescription. I suppose this comes from the hope that this one will be The One that makes everything better. Of course, this is accompanied by the apprehension that this one might not be The One after all…

I’ve become very adept at approaching these switches in a level-headed manner. “If I notice any strange side effects or abnormal thinking,” I say to myself, “then I will contact my doctor and make a change.” This is my antidepressant line of thinking coming into play. This is medicine, just like any other medicine. The wild card in all this, though, is the mind-altering drug factor. Here, the question become this: If I’m going crazy, how will I actually know it?

Think about it for a second: Do the majority of people who are insane actually know they are? A small percentage of them might, but part of what makes insanity what it is consists of a person believing a totally irrational line of thought makes perfect sense. Therefore, if a person’s mind becomes altered to the point they begin to abandon rational thought, how would they even know it? And if they don’t even know it, how would they know what to change that might make them better?

At the moment, I believe these worries just constitute paranoia on my part. I think if I really were going crazy, someone would have told me by now. And I’m sure I am oversimplifying the whole “other illnesses are so much easier to medicate” angle. Sometimes people have to run through multiple options of drugs before they find one that works for whatever they’re afflicted with. In the end, this will probably be a lot of sound and fury, signifying nothing.

Just in case, though, I’d like you all to make me a promise. If I start acting weird, let me know. Okay? Well, I mean, weirder than normal. I know you already have plenty of ammunition there. 🙂